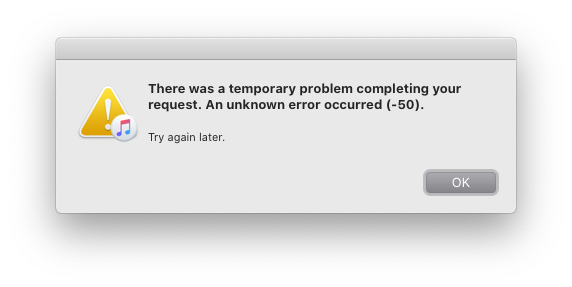 While I was working today my iTunes Dock icon started hopping. I switched to it and was greeted by that message. I didn’t listen to music at the time, in fact I hadn’t even switched to iTunes since yesterday. It was just running in the background, with nothing to do. I did not have any connection issues at the time, nor did I ask iTunes to attempt connecting somewhere.

I know, it doesn’t even seem too bad compared to other things we’ve posted here. We’re all just so used to tiny cuts like that by now. I almost clicked it away without making a screenshot before deciding to post it, because that’s just how it is these days, right? Things like that are normal. And I hate that.

Sure, to me it really isn’t a big deal. I know that this is just a hiccup in bad software. I know where and how I can check if my security was compromised and if this error is a result of that. I know that it’s an error I can safely ignore and move on with my life, and I also know when something does not fall into that category. But my parents don’t. My siblings don’t. Most people don’t. Most people have no idea about these things, because they have better things to do than to develop a sixth sense about shitty software.

As long as we teach people that dialogs like that are normal, we shouldn’t complain when they click “ok” in some shady dialog that promises them cool new emoji for their Facebook Messenger but actually installs a rootkit.