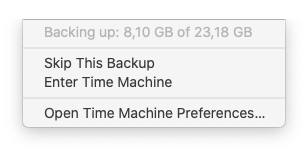 For months I have been wondering why on a top-of-the-line MacBook Pro the fans would always spin up like crazy when a simple Time Machine backup was running. It also seemed really odd to me that almost always when I checked, it would show several GB of data being backed up – I rarely change that much data. Then I read about Catalina fucking up yet another thing and figured that must probably be the reason.

Still, it was so insanly annoying that I could not let it rest. I figured there must be some way to find out what data exactly changed inbetween two TM snapshots. There is. I let that script run (for almost an entire day) and in the resulting output I was quickly able to find the directory that was responsible for almost the entire size of the changes: ~/Library/Arq/.

So I went into that directory, finding a Cache.noindex directory in it that was several dozen gigabytes large. After the recent debacle with Arq 6 (I’m still on version 5) my initial reaction was to blame the developer for putting that cache directory in the wrong place, causing it not to be ignored by Time Machine. But alas, there was the .noindex1 ending in the name, so should that not also mean that Time Machine ignores it? Yes. Yes, it should. But for whatever reason, it doesn’t. So for months, my two primary backup strategies have negatively affected each other by slowing down to a grinding halt and consuming ungodly amounts of CPU power and fan spinnage.

I have now manually added that specific directory to my Time Machine exclusion list and haven’t heard the fans since. It just works!