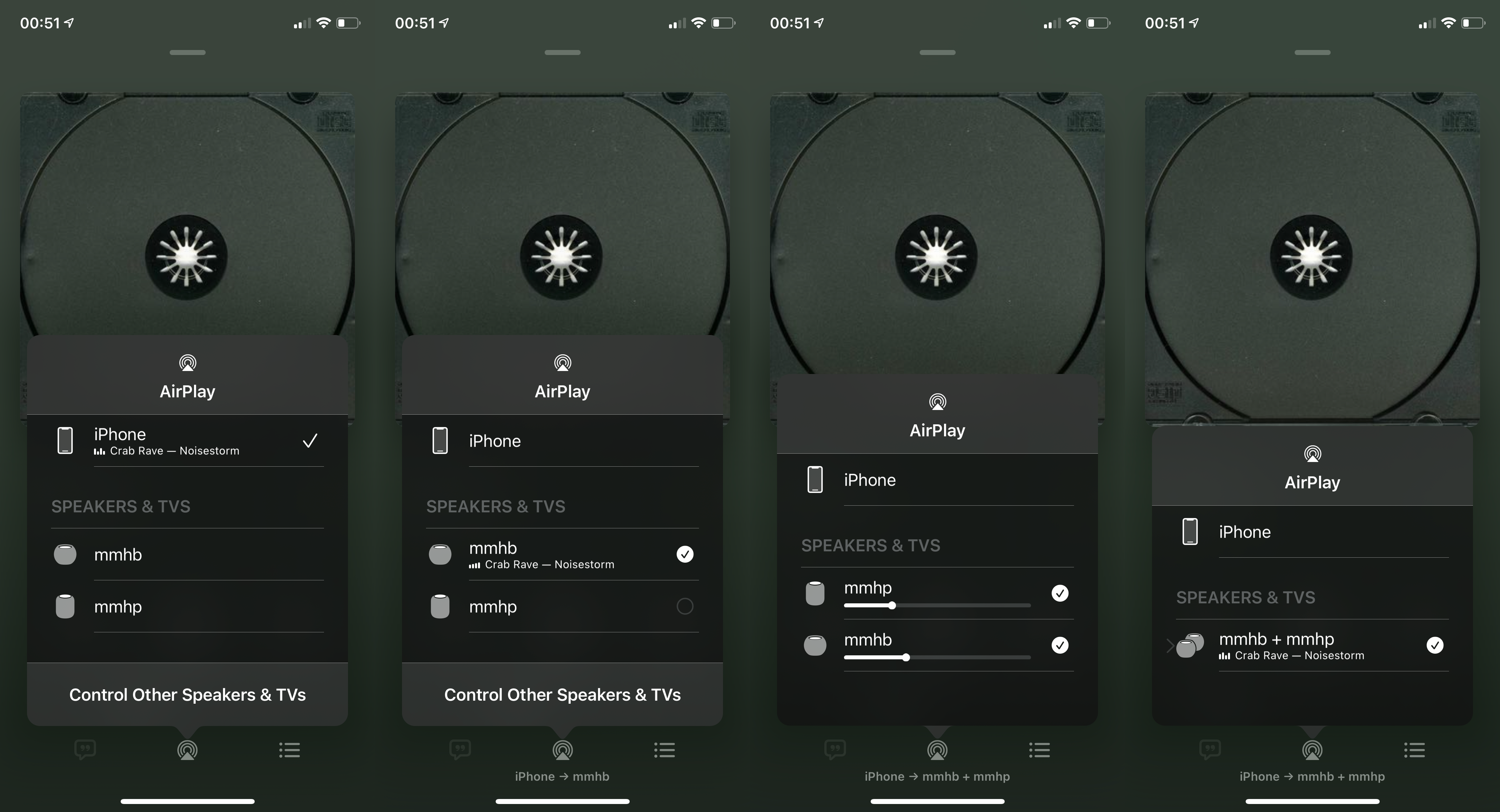 Oh hey, it’s throwback “no idea which day of the week this will be published”-day! The great unification of iOS and macOS continues, so the annoying behavior of how multiple AirPlay targets are (not) selected has crossed from macOS to iOS 14.

Sorry, a bit wordy again. But it would be wrong to not complain about absolutely infuriating things only because they are hard to adequately capture with just a screenshot.

Screenshot #1: Playback currently on the iPhone, but for my shower I want to switch over to my new HomePod mini in the bathroom, mmhb. I tap on it.

Screenshot #2: As expected, playback is now on mmhb. I finish the shower and go into the office – aka my living room1 – to start working. I now want to switch over to my existing HomePod, mmhp. I tap on it, carefully making sure I don’t hit the checkbox, as I don’t want to add an additional option to my selection, I want to select only this one entry.

Screenshot #3: Playback is now coming from both HomePods at the same time. I’m mildly annoyed that I now have to manually turn off the HomePod mini in the bathroom by tapping on it, and confused as to why they would make the checkbox the thing I have to tap in order to switch over to this single speaker instead of adding it to the list of active speakers.

Screenshot #4: While finishing this thought and starting to move my finger, they animate the tap target I’m going for away under my ass, replacing it with a new combined list entry. My first tap goes into the spot where mmhb would have been a millisecond ago and does nothing. My second tap happens before I completely realize what is going on, and hits the new checkbox. This disables both HomePods, so now my iPhone is raving again.

This interaction alone would be bad enough, but the worst is yet to come: Contrary to what I thought in step 3, there is actually no way at all to switch over completely. It doesn’t matter where in the list I tap on an inactive target, when another target is already active. It will always add it. I will always have to do the magical finger dance of quickly disabling the bathroom speaker after enabling the living room speaker when I want to switch over speaker instead of activating house party mode.

Of course, as with most modern Apple things, there are delays in the animation, and the timing of how often you can tap and have it recognized is a bit wonky. Too long to not be a nuisance, too short to reliably hit it before the animation removes your tap target. Now that I’ve learned my lesson in step 4: You can tap the little arrow in front of the combined entry to expand it and then turn off the speaker you were coming from, so you don’t have to take the extra step where for a few seconds your iPhone blasts you. You can see all of this in action in this screenrecording.

By the way, bonus annoyance: Compare the sorting in #2 and #3. I don’t quite get it. Is it because all inactive speakers are always below all active speakers, leading to the sort order shown in #2? And in #3 both speakers are active and are sorted as one group of two items, not two groups of one item? Fair enough. I’d expect Apple to handle this case where the behavior adds nothing but confusion better, but okay. However: If #3 is showing both speakers sorted as equals, then why is the sort order not the same in #1? Maybe it’s recency of use? Who knows. All I know is: It just worksn’t.