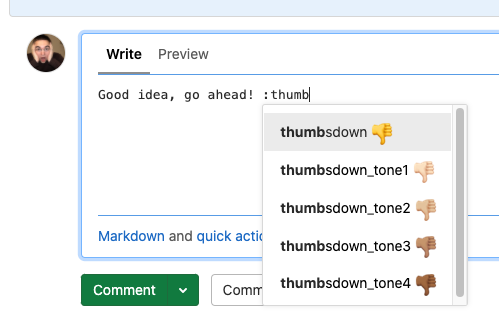 Something very mild compared to most things we post here. And there is solid reasoning behind it – alphabetic sorting. Still, it annoys me on an almost daily basis. Pretty much 100 percent of the time when I want to use a “thumbsup” or “thumbsdown” emoji in GitLab, what I want is the “thumbsup” – to give positive, encouraging feedback. But the default choice is the negative one, and I have to type the word “thumbs” plus the differentiating “u”. So basically I’m typing the entire emoji name, because the autocompleting list that is supposed to help me not having to type the entire word is rendered useless.

I’m not sure what a good solution could look like here. Sorting by usage frequency seems overly complex. Maybe an option to hide the (or select a default) skin tone variations in the list, so using Arrow-Down would quickly select “thumbsup”. Or removing the negative reactions, either from autocompletion or altogether? The “old man yelling at cloud” in me says that negative feedback should always use words, but that doesn’t mean there are no valid use cases for the “thumbsdown” emoji. Maybe change them to “thumbs_up” and “thumbs_down”, and implement fuzzy autocompletion on word beginnings, so that I could just type “:tup” and be done with it. At least that would still be quicker than using the native macOS dialog via Ctrl+Cmd+Space. Luckily I’m not alone in being annoyed by this, and there is plenty of ideas in GitLab issues already.